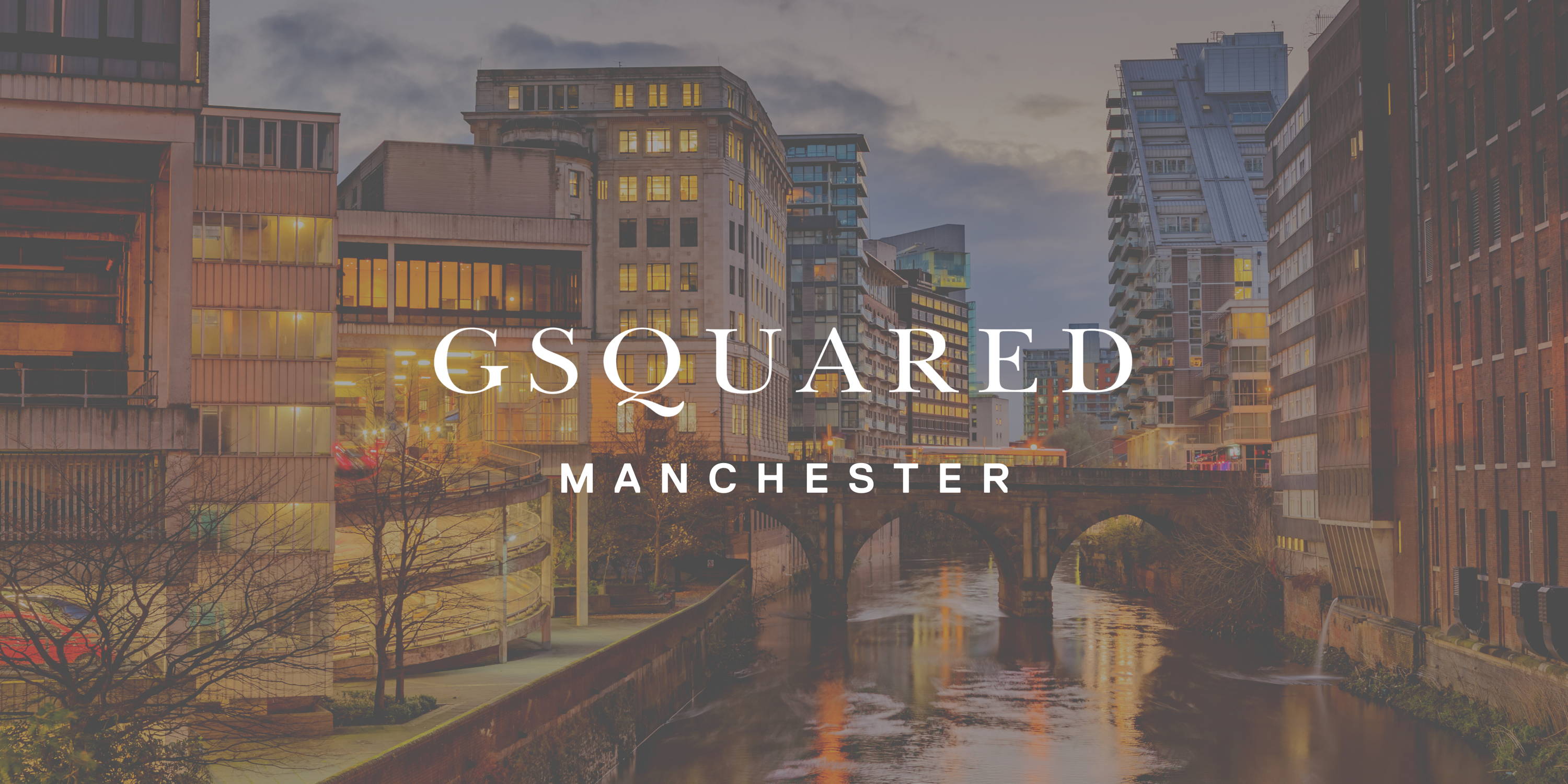 Our home city, this is where GSquared first started. With the recent growth of the city on an explosive level, it made perfect sense to roll out our first site to cater for the increased demand for luxury fitness clubs and gyms in Manchester. Our first Manchester gym is the iconic Royal Exchange Arcade in St Anne’s Square, with a further 2 sites now agreed and going through planning. GSquared is the city's first high-end, open gym facility.

Set against the rich culture of a city that mixes the old with the new, Manchester is a city of music, sports and fast-paced growth. Who can hear the name ‘Manchester’ without thinking of the iconic red-and-blue rivalry led by two of the worlds' leading football teams? Sports plays an important role in the identity of Manchester, so there's no better place to home the very first GSquared Health Club.

Few cities can also boast the musical talent that Manchester can, with names like Oasis, The Smiths, and Joy Division calling Manchester home. A still-thriving music scene is a major point of interest for the UK gig circuit, with stand-out venues like The Apollo and the Academies pulling in a wide range of recognisable acts, while smaller venues like the Night and Day Café and the Band on the Wall create more intimate atmospheres. The Manchester music scene and the venues that support it are at the heart of many who find themselves relocating to our beloved city, and likewise, the demand for the provision of equally as excellent fitness clubs in Manchester has increased tenfold.

As with all our locations, our Manchester gym is not only equipped to challenge you physically. We are dedicated to a unique and holistic approach to fitness that accounts for the mental, emotional, and spiritual components to health too. Our first health club in Manchester is situated in the M2 postcode, with the 2nd location planned for the M1 area.

Another city within the Northern Powerhouse, we have long been fans of the energy and style of the UK's industrial centre. A real heavyweight in commerce and having recently landed major contracts from London, the city is now in its strongest position ever. The fitness scene in Leeds is fast expanding to keep up with the number of professionals setting up their base there, as the Leeds jobs sector continues to flourish. We think it's only fitting to provide the city with the level of fitness luxury that GSquared Clubs has to offer. Our presence as the finest gym in Leeds will enhance the potential for further growth and investment in the North; both of which we know are essential in encouraging the development of Northern cities with amenities on par with those in the South. Destined as one of the best gyms in Leeds, this location brings a highly anticipated level of opulence to the range of health clubs in Yorkshire.
Leeds health clubs needed a fresh uplift and a touch of style - and we've got it in spades. Our Leeds gym and health club is based in the heart of the city centre's LS1 postcode.

As a growing city with a vibrant and energetic centre, we wanted to be involved in the continued growth of this incredible Northern city. Introducing GSquared as one of the best Newcastle health clubs has been a long term desire for us. An energetic city brought to life by the charming personalities of those who love it most, Newcastle is the undisputed star of the North East. With its distinguished connections to sports and fitness, the Toon has long been an envisaged destination for our upcoming health club expansions. We are finally delighted to be introducing the entire GSquared Group with both the Health Club and the Education and Research Department to help train, mentor and develop the next generation of aspiring fitness professionals. We're endlessly passionate about helping to teach those who go on to make their mark on the fitness industry next, and our Newcastle health club will help us achieve this on an increasingly impactful level.

Our Newcastle gym and health club will be situated in the NE1 part of the City. A dedicated space for the best city centre gym in Newcastle.

With many contacts, friends and partnerships in Birmingham, it only makes sense that we would select this as one of our upcoming gym locations. Looking forward to reconnecting those ties to fitness with our forthcoming Birmingham health club, the team is keen for us to cement our impending status as the best Birmingham gym around. As a city with great commerce, many notable landmarks and a tonne of history, our proposed location will enrich the status of the Birmingham gym scene remarkably. We are proud to be bringing the GSquared concept to this hub of fitness activity in the form of our Birmingham health club, with all the features of our opulent Manchester gym. We're also elated that the education and research department is just as excited as we are for this step in the growth of GSquared. We look forward to playing a monumental role in providing quality support, training and mentorship for the Birmingham fitness professionals wishing to make a career for themselves.
Our luxurious Birmingham gym and health club is due to be situated in the B1 area of the city centre.

As the capital city of Scotland, we had to choose Edinburgh as one of the key locations to roll out our health clubs to - and what a remarkable choice of location it has been. An enticingly historic city steeped in tradition, Edinburgh is brimming with character and the ever-intriguing remnants of days gone by. A constant landmark that sits atop the city like a majestic crown, Edinburgh Castle merges seamlessly with the surrounding architectural landscape. This is best enjoyed with a visit to Camera Obscura, where you can take in panoramic views of the city. The Scottish capital is a highly unique place that intertwines a rich sense of vitality with the deep level historical interest that the entire city is immersed in. It's this juxtaposition of historical and modern life that makes our first location in Scotland such a brilliant addition to the fitness scene, as GSquared brings a never before seen sense of luxury to the range of Edinburgh gyms already out there.
We already feel a second location in the city could also be imminent, given the unique gap in the market for more of our opulent GSquared Health Clubs in Edinburgh. Our Edinburgh gym and health club is situated in the EH1 part of the city centre.

Due to our previous experience with operating fitness spaces in Glasgow, our team were passionate to return to The Dear Green Place. We agreeably determined that this was a great move for GSquared, as its potential as the best gym in Glasgow makes this a winning city for our impending expansion. The growing fitness culture in Glasgow, alongside the energy of the city, have made it an ideal location to base one of the finest health clubs in Scotland. The city is home to two of the world's greatest football teams, and notably, the lasting impression that the Rangers and Celtic clubs have had on sporting history have earned themselves the combined nickname of "The Old Firm". The impassioned severity with which Glaswegians embrace sports is one of the key reasons we're launching one of our health clubs in the city, and this is only complemented by our appreciation for the escalating improvements being made throughout the Glasgow area.

Our Glasglow gym and health club is located in the G2 area of the city, where our luxury health club offers an exclusive city centre retreat.

The energy and vibrancy of Liverpool as a city known for its tourist attraction is rapidly bolstering its commercial prowess. We want GSquared to be involved in that growth by bringing our high-end fitness facilities to the heart of the city as it continues to expand. Just a stone's throw from our initial health club location in Manchester, Liverpool is our favourite local city escape whenever we feel like a change of scenery or a weekend break full of British culture. With an extensive range of attractions, from The Beatles' museum to the Tate art gallery, there are plenty of sightseeing opportunities just around the docks alone. Bringing this city rich in culture up to scratch with its neighbouring health club amenities and gyms in Manchester, the arrival of GSquared is a welcomed transformation to the city. Rivalling only the best Liverpool health clubs with our luxury fitness spaces, we're proud to be adding to the scope of world-class gym facilities within this famed city.

Our Liverpool health club is situated in the L3 area; bringing our Liverpool city centre gym to the most convenient space possible.